Went for a walk… 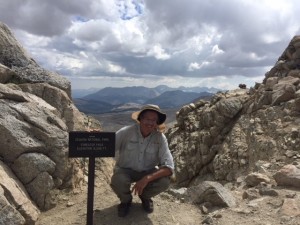 I’ve always wanted to climb Mt Whitney and to backpack the John Muir Trail. So, I took a few weeks off just recently to regroup mentally and physically, and did both. The JMT is 220 miles of arguably the prettiest scenery in the United States, with high mountain lakes and pristine meadows amid towering granite peaks. Mt Whitney is the highest mountain in the lower 48 states.

While on the trail (20 days) I had a lot of time to reflect on things and how we can draw lessons from nature. One big takeaway I had was this:

Knowing that Mt Whitney lay ahead for me and that at its peak it was higher than every mountain I would see throughout the trip, it was intimidating to think that I was going to have to climb that high. There were times when I would look at a nearby peak and think to myself, there is no way I can climb anything that tall. But instead of quitting, I kept following the trail and focused on the path in front of me. Before I knew it I would go over another pass that would put me closer to my ultimate goal.

The fact that I had a long range goal and a plan to do it were very important. The way I approached it incrementally in small steps was critical. The old line about the longest journey beginning with a single step is absolutely true. I didn’t try and do the entire trip in a week, or climb Mt Whitney on day one. The only way I was able to accomplish what I did was in many tiny increments.

The same is true in many things in life. It’s important to have long term goals, but unless you take steps towards them you will never get there. All it takes is a single step to move you closer to your objective. And then another, and another, until ultimately you find that you have arrived.

Whatever it is you seek to accomplish, be it financial, personal, or professional, even the smallest step you take puts you closer to your goal, and the sooner you start the sooner you get there.