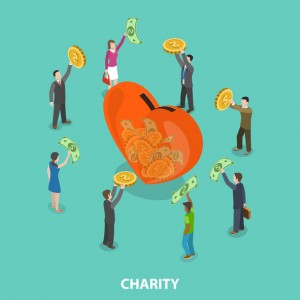 Initial estimates aren’t promising: The American Enterprise Institute projected June 18 that the law would reduce charitable giving by $17.2 billion this year, according to a static analysis. But in the six months since Republicans passed the 2017 tax act (Pub. L. No. 115-97), much of the impact is yet to be seen. For one thing, practitioners and professors who focus on nonprofit tax say there’s more to watch than just the numbers. “I think we’re all just kind of holding our breath and moving forward,” said Lisa Dietlin, a Chicago-based philanthropic adviser. Here are areas to watch as nonprofits wait to feel the full weight of tax reform.

Other Reasons for Donating

Trends in charitable giving involve factors other than tax changes, academics told Bloomberg Tax.
Many individuals are motivated to donate when the economy is healthy and stock market returns are strong, said Lloyd Hitoshi Mayer, a law professor at the University of Notre Dame who focuses on nonprofits. That’s because donors have more disposable income in both scenarios. “For many people, the giving is motivated not by tax concerns but by other concerns, and so the lack of itemization isn’t going to be a driving factor for them,” Mayer said. Americans will still donate if they feel strongly enough about something, regardless of the tax law, Dietlin said.

With the midterm elections in 2018, left- or right-leaning organizations may see a donation boost depending on the outcome. Americans gave about $410 billion to charity in 2017, passing the $400 billion mark for the first time, according to a June report from the Giving USA Foundation. The report was researched and written by the Indiana University Lilly Family School of Philanthropy.

“I tend to disagree with others in my field who think the sky is falling,” Dietlin said. Effect of Donor-Advised Funds Nonprofit advocates are also watching donor-advised funds, a fast-growing charitable giving vehicle. A donoradvised fund is administered by a public charity and is made up of contributions from individual donors. The donors can claim a tax deduction and direct the distribution of the funds in the future. “It’s something that could potentially throw off planning for nonprofits when they’re not sure if an increased donation is one that they’re not going to see again for a few years,” said Rick Cohen, chief operating officer at the National Council of Nonprofits.

Donors may have deposited assets into donor-advised funds in 2017 in anticipation of the new tax law, said Brian Galle, a law professor at Georgetown University who specializes in nonprofits. “They figure, ‘I better to take the deduction while I can,’” Galle said. Cohen said he expects the use of donor-advised funds to grow under the new tax law. Donors can make a contribution that’s large enough to itemize while spacing out distributions from that fund, he said.

The Internal Revenue Service in December released Notice 2017-73, which said the agency may develop guidance to “comprehensively address donor advised funds.” Practitioners have previously said some guidance in the area would be helpful, because use of the funds has increased and more than a year’s worth of questions have built up.

Nonprofits are waiting to see donor totals from 2018 to make budgets that factor in the effect of the larger standard deduction. Taxpayers may not know how the law will affect them until they determine whether to itemize or take the new standard deduction. “We are actually bracing ourselves as a sector to not see the full impact of this law until 2020,” said Allison Grayson, director of policy development and analysis for Independent Sector, a nonprofit advocacy group.

Any fluctuation in donations will matter for small nonprofit organizations, which are cash-strapped to start with, said Paul Scholz, managing partner of Onisko & Scholz LLP, a Long Beach, Calif.-based CPA firm. Scholz is advising his nonprofit clients to be prepared for a drop in revenue. They will have to “wait and see” what happens, he said.